If you are looking for a teaching career to take you somewhere more exciting and exotic, teach in Egypt! Teaching in Egypt lets you experience life in one of the world’s most exciting and cosmopolitan cities.

Art Teaching Job in Cairo, Egypt - August. A top American international school in Cairo require an Art Teacher to add to their creative and...

English Teaching Jobs in Cairo, Egypt - August. A top American international school in Cairo are seeking English Teacher to add to their Eng...

Year 1 Primary Teaching Job in Cairo, Egypt - August. If you are seeking an international teaching job for August a top international school in C...

Business Studies Teaching Job in Cairo, Egypt - August. If you are seeking an international teaching job for August a top international school in...

Maths Teaching Job in Egypt - August. If you are seeking an international teaching job for August a top international school in Cairo are looking...

Immediate Start Business Studies & ICT Teacher required for a top British International School in Cairo. If you are immediately available and rea...

One of the best schools in Egypt require a solid all round teacher of Humanities for August. The role is to teach History & Geography at Key Stag...

A Top International School in Egypt require a teacher of ICT for August. The role is to teach Key Stage 3 & A Level ICT on a 2 year renewable cont...

A British International School in Egypt are seeking a teacher of Modern Foreign Languages for August. The role is to teach Key Stage 3 and GCSE Frenc...

Are you seeking a teaching job abroad in Egypt for August? Maths Teacher - Egypt - August  An International School in Egypt are seeking a fully...

A British School in Cairo require Science Teachers for the new academic year commencing in August. Applications are welcome from candidates of all sp...

A British School in Cairo require Mathematics Teachers for the start of the next academic year.. Maths Teaching Job in Egypt. The school follows a c...

An International School in Cairo, Egypt are looking for qualified English Teachers for the start of the next academic year. There is an IB and MY...

About The Arab Republic of Egypt

The Arab Republic of Egypt, the land of mighty pyramids, mythical god kings, enigmatic sphinxes and Cleopatra, is located on the northern tip of the African continent. It is also connected to the Asian continent via Sinai Peninsula, a 23,500 sq. mi2 (61,000 km2) land bridge that is also the site of the Suez Canal. The country, which is one of the six independent cradles of civilisation, is bordered by three countries (Israel on the northeast, Libya on the west and Sudan on the south), as well as the Mediterranean Sea on the north and Red Sea on the east.

Egypt is the third most populous nation (96 million) and the second largest economy (£248 billion) in Africa. Its political and economic influence, however, transcends socioeconomic numbers. Egypt’s cultural influence has shaped Mediterranean, Middle Eastern and northern African countries for several millennia.

Islam (Sunni) is the major religion here, accounting for 90 percent of the population. However, there is also a significant number of Coptic Christians, numbering at approximately 10 million people. While Arabic is the primary language, the majority of the urban population speaks English or French. The currency is called the Egyptian pound, which consists of 100 piastres (or 1,000 milliemes).

The public school system is generally looked down upon, so most people who can afford it send their children to private schools. As such, there is a great demand for foreign teachers, particularly native English speakers, especially in major Egyptian cities like Cairo, Alexandria, Luxor and Giza. While private schools and international schools offer the best employment opportunities, many experienced English as a Second Language (ESL) certified-teachers have established booming language schools here. Foreign teachers are even sought for teaching positions at pre-school level. 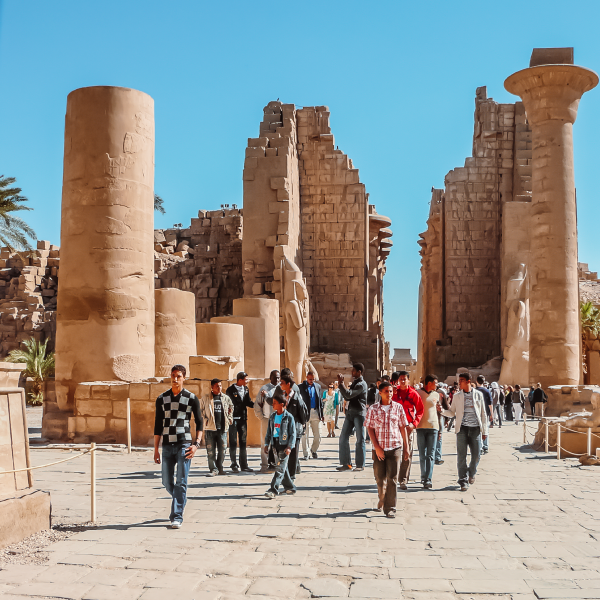 The three major appeals of working in Egypt are:

To teach in Egypt, British teachers should possess the following qualifications:

It should be noted that the pay range for foreign teachers here is quite low. However, this is balanced by the low cost of living. This makes Egypt an ideal destination for fresh graduates looking to build their résumé while experiencing a new culture. Fair warning though:

Egyptians are quite class conscious, children from wealthy families tend to attend the top schools in the country which are often British International Schools.

Please note that to work in Egypt, you will require a work and residence permit on top of an entry visa. Applications are usually made by employers, but bureaucratic inefficiency usually drag the process into months, so please make suitable allowances prior to making moving arrangements.

Remuneration of a Foreign Teacher in Egypt

As far as attires are concerned, Egypt has no compulsory dress code. However, this is a conservative Islamic nation, so women should dress appropriately. Loose trousers and long skirts are perfectly acceptable, but cleavages are not. Also, use sunglasses when walking around as looking men in the eye is considered a form of flirtation by some. It is advisable to carry a pashmina around in case you have to enter into a government building or attend a public function. Do not travel alone at night as women are frequently harassed here.

Alcohol is freely available to foreigners. However, take care not to drink in public, especially during the month of Ramadan.

Important: Egypt has strict drug laws. In November 2017, a British woman, Laura Plummer, was arrested at the Cairo International Airport for bringing in painkillers meant for her husband. She is now facing the prospect of up to 25 years in jail or the death penalty.

Looking for teaching jobs in Egypt? Find them here